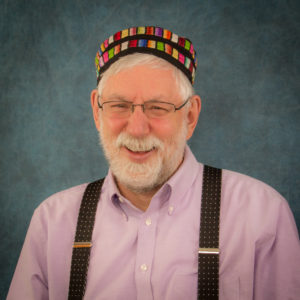 Jim Brulé has s’micha as a maggid in a highly-respected lineage, including Shlomo Carlebach (zt”l), R. Zalman Schacter-Shalomi (zt”l), and Maggid Yitzhak Buxbaum. As important as that is, it represents just one of the dimensions of what he brings to this program.

Jim has distinguished himself as a clinical psychologist, a respected author in the field of artificial intelligence, a successful entrepreneur, and a regulatory expert in healthcare. All of these disparate fields are interwoven with the force of story. But again, these are simply other lenses through which he can be viewed.

Since he first encountered a radically different ethnic spirituality while living in the Philippines as a teenager, he has been drawn to the insights and transformative connections that spring out of actively encountering other cultures and faith traditions with an open heart.

On a recent trip to Israel, the small group he was traveling with met with the Sufi Sheikh of Nazareth, along with many other spiritual leaders from the Jewish, Christian and Muslim traditions. He immersed himself in streams of Buddhism from India and Japan, and had a surprising encounter with a Hindu guru in Nepal. Closer to home, he shared deep encounters with the Lakota Sioux in the height of the 1970s. He has been a co-leader of multi-faith groups with Muslims and Christians, separately and combined, in work that continues today.

These encounters – and others too numerous to mention – have deepened his Jewish experience; they help him uncover its treasures at every turn. Indeed, the diversity of his experience enhances, rather than diminishes, his Jewishness.

Since his s’micha – ordination – he has traveled around the country telling transformational stories, leading workshops, and maintaining a small number of private students. His audiences have numbered from the thousands to the few. It is only now, however, that it has become clear that it is time for him to pass on his skills, knowledge, and passion to the next circle of spiritual leaders.

If you come from a Jewish heritage, you may wish to consider striving for s’micha, and carrying on the lineage. No matter what your heritage or beliefs, the Multifaith Maggidut program is a real opportunity to discover and uncover the richness of Spirit as it infuses our stories – and our lives.