What happens when two rabbis who seem to disagree about the very fundamentals of spirituality meet? Hear a great story and learn a great lesson in this story told in this month’s Spiritual Storytelling Jamboree. Oh, and sign up for our next term – the first class is free, and it’s live on Skype Wednesday, August 30! Register here! 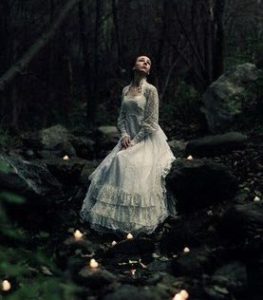 If it had been the Shekhinah, they could not have been more amazed. Out walked this young woman, dressed all in white, her face radiating sweet kindness. She motioned to the kitchen, and suddenly the smells of a delicious feast wafted their way to the travelers. Wide-eyed, they looked back to the husband, whose visage was warm and welcoming, and he waved them back to the table. “Please, be our guests for one last meal, and let our story be told.”

Everyone hurried to the table, which was now set with linen and expensive plates and cutlery. The wife took a seat between her husband and the Baal Shem Tov, to whom she turned. “Do you not recognize me?”

“Ah, it has been so many years,” she sighed. “I am Miriam, one of many orphans that you and your wife took in. I was only three when I joined your family…”

“Miriam… Miriam? Miriam! But… you left so abruptly! Whatever happened that…”

“Oh, Reb Yisrael, you really never noticed, did you? But now you will know.

“I had been living with you and Rebbitzin Chana for three years when she asked me one Sabbath to help serve the se’udah shlishit – the third meal. She gave me a large tureen filled with soup, a tureen that was just too big for me to manage. Nevertheless, I struggled mightily with it, finally depositing it heavily on the table, so abruptly that some of it spilled onto the tablecloth.

“Rebbitzin Chana was so angry that she slapped me hard across my face. You looked up when you heard my cry, irritated that your teaching was being interrupted. In that moment the Rebbitzin expelled me from your house. You offered no argument, but went back to your studies.”

The Baal Shem Tov’s face fell, and tears began to stream down his face. “Oh Miriam…” But she interrupted to continue.

“Also in that moment, though I did not know it at the time, a Heavenly Decree was issued: that you should give up your portion in the World to Come for allowing these sins to happen, just so you could study. A lesser man might have had a less severe judgment, but for one as holy as you…”

The Hasidim gasped, and the Baal Shem Tov reached out to the young woman. “I…” But again she interrupted.

“Years later I met my bashert, and with the grace of God we were married. After that I learned that he was one of the lamed vavniks, the thirty-six hidden tzaddiks upon whom the world depends. In time he learned my story, and on a soul ascent he learned of the Heavenly Decree against you. The two of us were determined to challenge it.”

At this, Miriam took her husband’s hand, and they gazed for a moment into each other’s eyes. Then she continued.

“We were able to strike an arrangement with the Heavenly Court: If you could be fully deprived of one Shabbas here on earth, then – since the Shabbas is a taste of the World to Come – your portion there could be restored.”

Her eyes sparkling, she turned back to her husband who smiled and nodded in affirmation.”

“And so it has been restored. Come, let us celebrate!”

And they all had a meal that none of them would ever forget, filled with song, and dance, and the joy of the World to Come.

Want to read the other parts of the story? Here are Part 1 and Part 2. 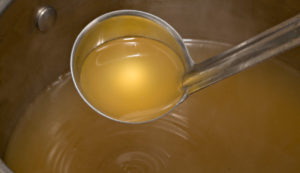 The soup was cold and watery; the small bits of meat dry and leathery. There was no light for study, and anyway, there were no books to be read. When they were done with dinner, the husband motioned them to the edges of the room, indicating they should sleep on the floor. The Hasidim wanted to at least go outside and sleep in the beauty of nature, but the Baal Shem Tov had made a holy oath – and it would not be broken.

Soon after, the husband retired to his bedroom and slammed the door behind him. The Baal Shem Tov and his disciples laid on the dirt floor and tried to sleep, but no one gathered more than a few minutes of rest all night.

The next day was even worse – the husband brought out an old siddur, raced through the morning service, reading just three verses from the portion, and then went back to his bedroom. Meals were simply the remnants of the soup, stale challah and leathery bits of meat. But each one held to the oath, and did not violate the husband’s austere practice.

Finally it was time to make Havdalah, and as soon as it was done they were each ready to hurry out the door. “Wait!” barked the husband again, “Are you so rude that you would not thank my wife for her generous gifts?”

The Baal Shem Tov held up his hand, and slowly turned to the husband. “Yes, of course. It would only be polite.” And with that the bedroom door opened, and the wife emerged.

Want to read the first part of the story? Check here. The story concludes in the next post…

One Friday morning the Baal Shem Tov awoke with the deep and urgent knowledge that he had to travel in his carriage to a place he did not know. He quickly gathered his closest hassids, telling them they were on a mission of utmost importance – but he did not know to where. They all hurried into his carriage, and the driver threw the reins to the horses, that they might fly at Heaven’s command.

They traveled for many hours, so many in fact that they all began to worry about finding a place to spend Shabbas – the Sabbath. As they passed nearby town after town they would look nervously at the Baal Shem Tov, but his eyes were closed and he was in a deep meditative state. Yet, unlike any other time they had seen him like this, his face was clouded with darkness, not lit with the light of a soul ascent. This only added to their concern.

Suddenly, the carriage turned away from the villages and headed into a deep forest. The sun was just beginning to dip below the horizon when they crossed a small field and came to an abrupt stop before a shack. They hurried out of the carriage and the Baal Shem Tov made his way quickly to the door; knocking briskly.

Slowly, the door creaked open and a man peered out, his face wrinkled with anger and pain, not age. “Go away!” he barked, quickly sizing up the men. “I know you hassids – we don’t want you here!”

“Please, my dear brother, let us poor yids spend Shabbas with you – look, the sun is nearly set! We will not be a burden, I promise!”

The man was already shutting the door when he heard the words, “I promise.” “You will make an oath? To the Holy One, Blessed Be He, that you will follow our traditions for the Sabbath, and not your own? You will eat what we feed you, sleep where we put you, and not leave this house from the moment you enter until Havdalah?”

There was to be no negotiation – the Baal Shem Tov quickly made his vow, and he and his Hasidim hurried inside. There, a table with the most meager of candles, wine and bread was set; the man fetched clay bowls for the watery soup, and called to his wife, in the other room, to come light the candles.

“Not tonight,” she cackled back. “I will not be seen by these uncouth men.”

So the husband lit the candles, made the brachot over wine and challah, and began to serve the meal. The hassids, attempting to bring some of the sweetness of the Sabbath into the home, began swaying to a wordless melody – a niggun.

“Stop!” the husband bellowed. “No singing, no swaying, no deep discourse or discussion. These are not my custom!”

Appalled, the hassids turned to the Baal Shem Tov, who merely nodded in bereft submission to his oath. And so began the worst Shabbas that any had ever experienced.